Io has dark hair with an ahoge, along with black eyes and glasses. Like most of the students of Nekoge Prefectural High School, he is mostly seen in his school uniform, although he has been shown in other outfits as well.

He is smart and stoic, yet kind at heart. He is responsible and independent. He is oblivious to Tsumiki's crush on him, though he sometimes makes romantic comments/gestures towards her. She is the closest girl to him regardless. Like Tsumiki, he is a good cook and is considered a genius. Io is naturally calm, but he apparently detests laziness or slacking in general, as he hit Mayoi on the head once when she became distracted from her studies.

He is usually seen in school spinning a pen with his hand, fast enough to catch Mayoi's surprise at the speed. Pen-spinning seemed to be a hobby, since Io is very often seen doing it in the anime, also spinning some other objects like chopsticks and fireworks. At times, he unknowingly acts like a casanova, and thus is very popular with cats. His popularity with cats may have been a nod to Tsumiki's more-than-obvious crush and reactions when close to him.

Io is emotionally dense, as he often fails to recognize Tsumiki's romantic attractions towards him and is unaware of the fact that his charm made him so popular with animals (specifically cats), claiming that his peaceful disposition made them happy instead.

He is also quite strong, though not shown as often as Tsumiki, as shown during Sakaki or Mayoi's pranks and antics.

In the manga, he is able to catch a fish with chopsticks, while in the anime, he is able to kill a mosquito with a toothpick. He also displays a lot more expressions and emotions than he did in the anime, as he seemed to panic when Tsumiki bit him on the head and was nervous when the girls (Hime non-inclusive) discovered his part-time job at Hatch Potch. 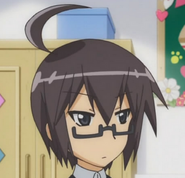 I Shall Rid The World Of Itching!