Edit
watch 01:36
We're Getting Mutants in the MCU - The Loop
Do you like this video?
Play Sound

Kana Miyama has short green puffy pigtails and blue eyes. Kana is of medium height similar to Mayoi. She is rarely seen outside of her school uniform.

Kana was also shown to be quite athletic, as she ran around the whole school during the Kick the Can game and wasn't even a slight bit tired when the game came to an end. She was able to burst through a fake wall set up by Mayoi's team with ease.

Kana is a cheerful and energetic girl, as she always smiles and likes to hangout with her classmates, particularly Saki Sakimori. Like Mayoi, Kana has a playful side to her personality, as she is sometimes seen within Mayoi's circle along with Saki and Sakaki. Her pranks, if any, are usually aimed at Tsumiki, though she doesn't cross the line like Mayoi (and does not get hit as a result).

Kana is apparently friendly and easy-going, as she was known to be friends with many students in the school. 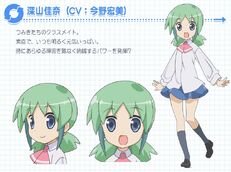 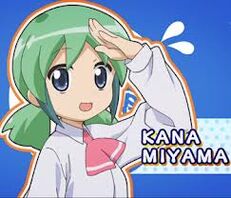