Miiko Inui (戌井 みいこ Inui Miiko) is the older sister of Sakaki Inui and owner of Hatch Potch Cafe. She is apparently a friend of Sakaki's homeroom teacher, Kikue Sakuragawa.

Like Kikue, Miiko is usually added in as a comedic relief.

According to Sakaki, Miiko is an easy-going young woman. She is always cheerful and understanding, though her reactions to certain things going on around her is a tad bit slower than everyone else.

Miiko is a very serious store manager, as she have threatened to fire Io should he upset her customers.

It is apparently very difficult to scare or surprise Miiko, as Io failed to imagine her reaction towards Mayoi speeding towards her in a bear costume. Miiko is fond of saying "My my" ("Ara ara~")

Miiko is about Io's height, though a large portion of her hair contributes to this. She is almost never seen outside of her Hatch Potch maid outfit.

Miiko has long blonde hair that reaches her waist. Her eye color is unknown, as she never opens her eyes. 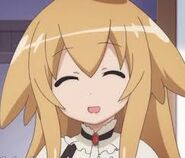 Miiko trying to convince Tsumiki to work for her.